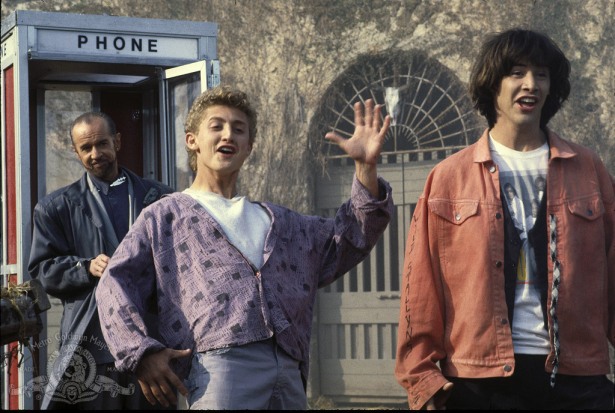 One of the more profound ethical imperatives to arise out of the late twentieth century was put forth by a young man from San Dimas, CA. William (“Bill”) S. Preston, Esq. was born into an upper-middle class home around the time of the Second Indochina War. The turmoil, both domestic and abroad, that led up to and followed this conflict would have likely played a role, albeit an unconscious one, in the young man’s perspective of the world.

William did not have a close relationship with his biological mother, as she had died in his early years. His father later remarried, and although William was much closer in age to his step-mother than his father was, he seemed able to have a civil relationship with her.

One of the consequences of the Reaganomic boom of the 1980s was more disposable income for middle class families. This indirectly provided the opportunity for a creative outlet for William, as he was gifted his first guitar at age 14. It was around this time that his lifelong friendship with Theodore Logan began and the two formed a band called “Wyld Stallions”.

The friendship of William and Theodore was a turning point not only in the context of William’s musical future, but also in his ability to discuss and refine what would become his moral philosophy.

Between the World Series upset of the Oakland Athletics by the Los Angeles Dodgers in 1988, and the San Francisco Earthquake of 1989, a sequence of events occurred that would have a  ripple effect for the history of the past as well as the history of the future. It was during this adventure (see “Strange Things are Afoot at the Circle K (San Dimas 1989)” for a more in-depth look at this exploit) that William Preston’s ethical imperative was first pronounced.

“Be excellent to each other.”

Both concise and categorical, William Preston’s imperative contains within it a rich philosophical history, as well as unadorned direction.

He at once answers Hamlet’s metaphysical soliloquy with an existential affirmation. He transcends and includes Descartes’ cogito, not mere acknowledging that he is, but how we should be to one another, all the while simultaneously abrogating any question of solipsism.

Evidence does not suggest that William was directly acquainted with Aristotle. However, he was most certainly familiar with the historic and philosophical heritage passed forward to him from So-crates. Even so, we can see that William intuitively came to the same end as The Philosopher with his emphasis on arete, or excellence.

In Nicomachean Ethics, we are reminded, “arete then is a settled disposition of the mind determining the choice of actions and emotions…”. To this end, the excellence toward which William would have us strive reflects his own practice of focusing on what is important and taking the actions to achieve what is good and right.

Finally, no discussion that even hints at deontology would be complete without acknowledging Kant. Kant’s Categorical Imperative is the derivation of some of the most densely recorded philosophizing in the Western world. Ultimately, it boils down to this:

“Act only according to that maxim whereby you can, at the same time, will that it should become a universal law.”

Essentially, Kant would have us create rules for behavior that would be worthy only if we could wish that they apply to all people at all times. Only then would we be justified in acting.

The brilliance of William S. Preston’s imperative is that it not only conforms to Kant’s unconditional rule, but that it does so simply and elegantly. “Bill” Preston, in one line, consolidated centuries of philosophical thought to address one of the most important questions humankind has ever asked itself: “What are we supposed to do?”

Once we understand this, then, we may certainly –